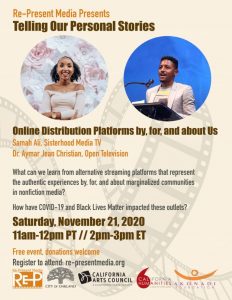 Online Streaming Platforms for, by, and about Us 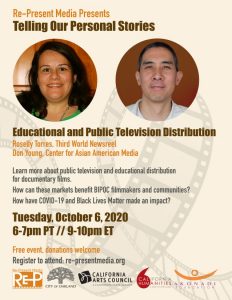 with Roselly Torres and Don Young

We heard from two long-time industry folks on how educational and public television distribution are changing for BIPOC filmmakers given the impact of the pandemic and the push for social change in the industry since the Black Lives Matter movement has gained new urgency. 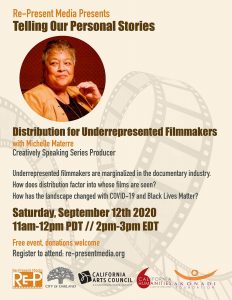 Michelle Materre shared insights with us about her perspective on distribution from her decades of experience, especially in light of the pandemic and impact of the Black Lives Matter movement. Michelle is best known for role as producer and host of the Creatively Speaking film series in New York City, which won a Film Heritage award from the National Society of Film Critics. Her early work included distributing the seminal films Daughters of the Dust (1991) by Julie Dash and L’Homme Sur Les Quais (1992) by Raoul Peck with her company KJM3 Entertainment Group. 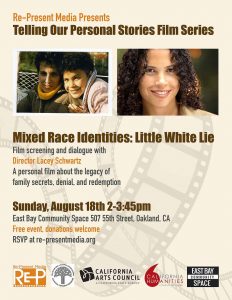 Little White Lie is a personal film about how the filmmaker came to terms with being raised as a white Jewish girl after discovering that her biological father was black. 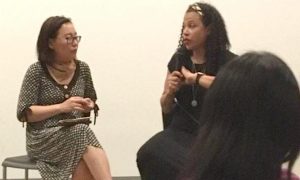 The documentary Little White Lie (2014), conceptualized and directed by filmmaker Lacey Schwartz Delgado, raises many questions related to identity and shifts in self-perception. Following the screening event on August 18th, 2019 at the East Bay Community Center, she interacted with the audience, discussing perspectives on denial and acceptance.

First, Schwartz described how the concept of the film evolved. Little White Lie, she explains, shifted from a documentary focusing on an issue-based film about Jewish and black communities in 2002 to a deeply personal work when filming began in 2006. “What is the beginning, middle, and end [of the film],” Lacy said, becomes informed by shifts in self-perception. This relates to a bigger notion of the social construct race, where there is a choice between focusing on big societal issues versus individual familial structures. Lacey mentions that struggles around race are often experienced interpersonally, such as within families, instead of through overarching societal issues.

Lacey Schwartz, within Little White Lie, identifies as a black woman. When questioned by an audience member on whether her self-identity was exclusive or non-exclusive, specifically relating to Lacey’s origins of being born half Jewish, she says that while identifying as Jewish and black now, identities are fluid and that race is defined by perceptions of people.

While interviewing people after the question and answer session, I found out that another volunteer experienced a similar hiding and denial of identity. She, like Lacey, realized she had a different father following the beginning of college, yet she does not discuss the issue with her mother due to the cultural shame or stigma her mom would face, internally and externally. From other audience members, I found several second timer viewers of the film, and that Little White Lie became of personal significance to them because of its resonance with their stories. 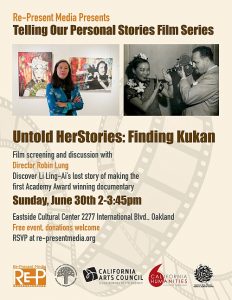 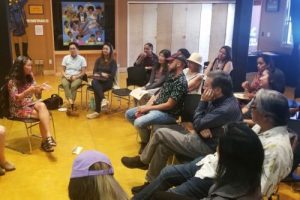 Director Robin Lung presented and discussed her film Finding KUKAN with community members at the Eastside Cultural Center in Oakland. Her film uncovers the lost story of Li Ling-Ai, a Chinese American woman whose documentary film KUKAN was recognized by the Academy Awards in 1942. 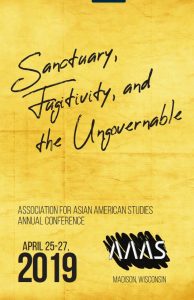 We organized the panel Documenting the Undocumented: Building Partnerships Between Media and Activists to Combat Southeast Asian Deportation at the annual conference of the Association for Asian American Studies.

We explored how leveraging and creating collaborative networks between community advocates and media makers can strengthen resistance and raise awareness of successful opposition to unjust deportations, to policing and surveillance of black and brown communities, responses to racist public policy, and disengagement with narratives of divide and conquer. 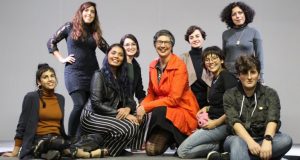 With Ethnocine, we co-sponsored a Bad Feminists Making Films event at MACLA (Movimiento de Arte y Cultura Latino Americana), at the annual meeting of the American Anthropological Association with support from Rhiza Collective.

Tricia Creason-Valencia—Changing Boundaries: The History of San Jose tells the stories of working people, political leaders and dreamers who built the city of San Jose.

Elena Herminia Guzman—Smile4Kime explores mental health, race, and policing through the eyes and experience of a young African American woman dealing with the trauma of sexual assault.

Nadia Shihab—Jaddoland follows the filmmaker’s return to her Texas hometown to visit her mother, an artist from Iraq, to witness the beauty and solace that emerge through her creative process. 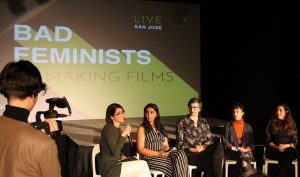 Filmmakers discussed how their work addresses feminist intersectional analyses, including race, class, sexuality, nationality, gender, and/or religion at all stages of the filmmaking process.

We reviewed preliminary findings from our survey of emerging documentary filmmakers of color regarding their experiences of the industry and strategies for support. 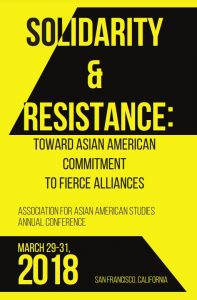 We presented at the annual conference of the Association for Asian American Studies with a panel titled: “Embracing West Asia (the Middle East) in Asian American Identity in Media Representation.”

We spoke on the cultural and historic relationship between West Asia (Middle East) and East and South Asian people. We supported thinking of Asian American more broadly to be inclusive of Middle Easterners, as a voluntary multiple identity in addition to other identities.

Two sold out events took place on February 17th and 18th in Oakland, California and brought together community members of diverse ethnic and faith backgrounds.

Tales from the Middle East 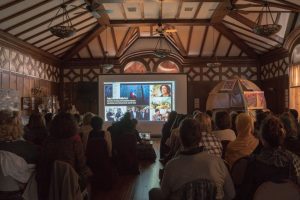 With support from California Humanities, Neda Nobari Foundation, and in collaboration with Kehilla Synagogue and the Islamic Cultural Center of Northern California, we presented three filmmakers from the Middle East who engaged audience members in short film screenings and community dialogues.

Michal Aviad, Sabereh Kashi, and Itir Yakar focused on personal storytelling as a way to bring greater understanding of communities from Palestine, Israel, Armenia, Turkey, Iran, and the U.S. 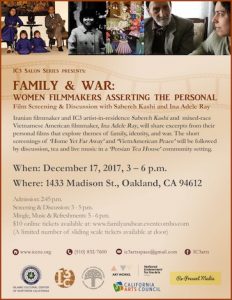 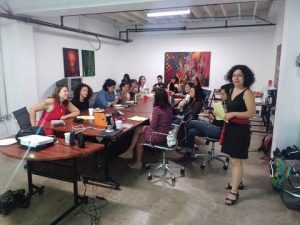 We hosted two convenings in September and October 2017 with emerging documentary filmmakers of color. About 25 filmmakers participated in-person and online. We discussed challenges, trends, and solutions in distribution and funding of personal story films.

As a follow-up, we will be soliciting written feedback in a survey and will report back on the findings. 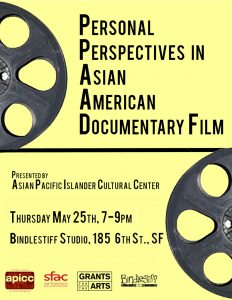 As part of the United States of Asian America Festival, we showcased four filmmakers in a panel workshop focused on personal stories in Asian American filmmaking, moderated by RJ Lozada.

This event was presented by the Asian Pacific Islander Cultural Center, funded by Grants for the Arts and SFAC 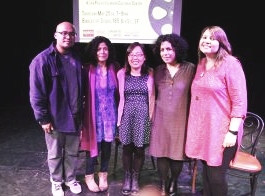